Due to the harsh weather conditions in Khyber Pakhtunkhwa (KPK), the Elementary & Secondary Education Department has released a revised schedule for school timings in middle and higher secondary schools in the region. From January 2nd to January 31st, 2023, these schools will operate from 9:00 AM to 2:30 PM. This change will be implemented for all schools in KPK.

The decision to revise the school timings was made due to the cold and foggy weather that often occurs in KPK during the month of January. The morning hours are especially cold and foggy, which can lead to traffic delays and even accidents. This can make it difficult for students and staff to arrive at school on time.

Also Read: A Decision has been Made by Punjab University to Extend its Winter Vacations

While other regions of Pakistan have extended their winter vacations due to the harsh weather, the KPK government has not granted an extension for schools and colleges in the region. This is because there has been a gap in studies over the past two years and the government wants to make up for this by keeping schools open. However, the Punjab government is taking action against schools and colleges that are not observing the winter holidays.

It is important for educational institutions to consider the well-being and safety of their students and staff, especially during harsh weather conditions. The revised school timings in KPK aim to do just that, allowing for a safer and more efficient travel to and from school.

Here is the official notification 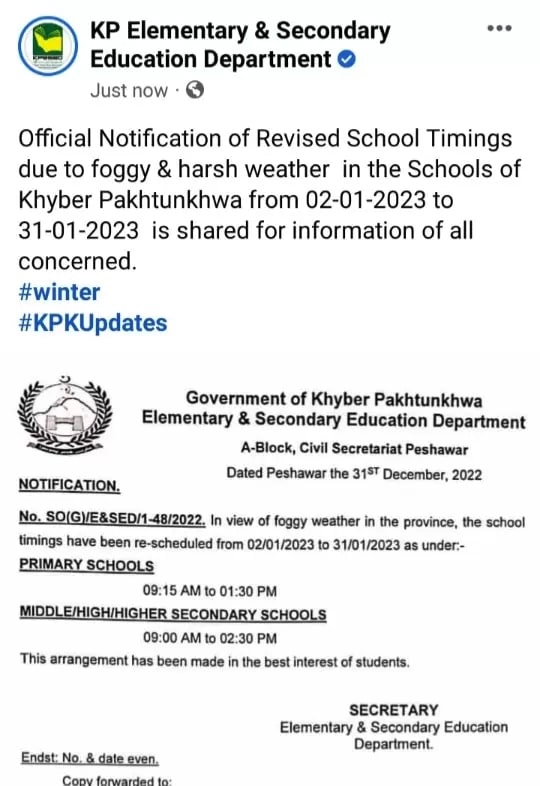