On this page, we post information about MCB Bank Jobs 2022 – MCB Careers 2022. Candidates looking for banking jobs across Pakistan are requested to visit this page for all the upcoming details on MCB career opportunities.

We collect this information from the MCB Official Career Portal https://www.mcb.com.pk/careers/visit-our-job-board, MCB Linkedin Page, and Rozee.

MCB Bank Limited is a Pakistani multinational commercial bank located in Lahore, Punjab, Pakistan. Most of the shares are held by Pakistani company Nishat Group and Malaysian bank May Bank. The bank has a large network of 1,551 branches in Pakistan.

It was added by the Adam G Group on July 9, 1947. The bank was established to provide banking services to the South Asian business community. The bank was nationalized in 1974 under Zulfiqar Ali Bhutto. It was the first bank privatized in 1991 and was bought by a consortium of Pakistani corporate groups led by Nishat Group. As of June 2008, Nishat Group owns a majority stake in Bank. The president of this bank is Shoaib Mumtaz.

The group has a presence in the country’s business sectors such as banking, textiles, cement, and insurance. Mian Muhammad is the chairman of both Mansha Group and MCB. The Bank has set up Islamic Banking Units in six cities with specialized branches of Islamic Banking to offer Shariah-compliant products and services.

In 2005, the bank’s management changed its name from Muslim Commercial Bank Limited to MCB Bank Limited to explore international markets. He faced resistance to obtaining a license, especially from Western countries, because of the word Muslim. In 2008 the MCB head office was shifted from MCB Tower, Karachi to Lahore in a newly constructed building, namely MCB House located on Ghous-ul-Azam Street, commonly known as Jail Road.

Currently, The MCB Bank has announced new employment opportunities as Oracle Developers/Oracle Apex Developers and Contact Center Executives. These positions are based in Lahore and Karachi.

Interested applicants across Pakistan may apply for these Banking Jobs. Men and Women both are eligible to get recruited for these vacancies. The MCB Bank is looking for highly motivated, qualified, dynamic, and committed professionals having Bachelor’s Degree and Master’s Degree.

Candidates must review the eligibility criteria before submitting applications. Only applicants whose qualifications meet the eligibility requirements perfectly should apply for these vacancies. 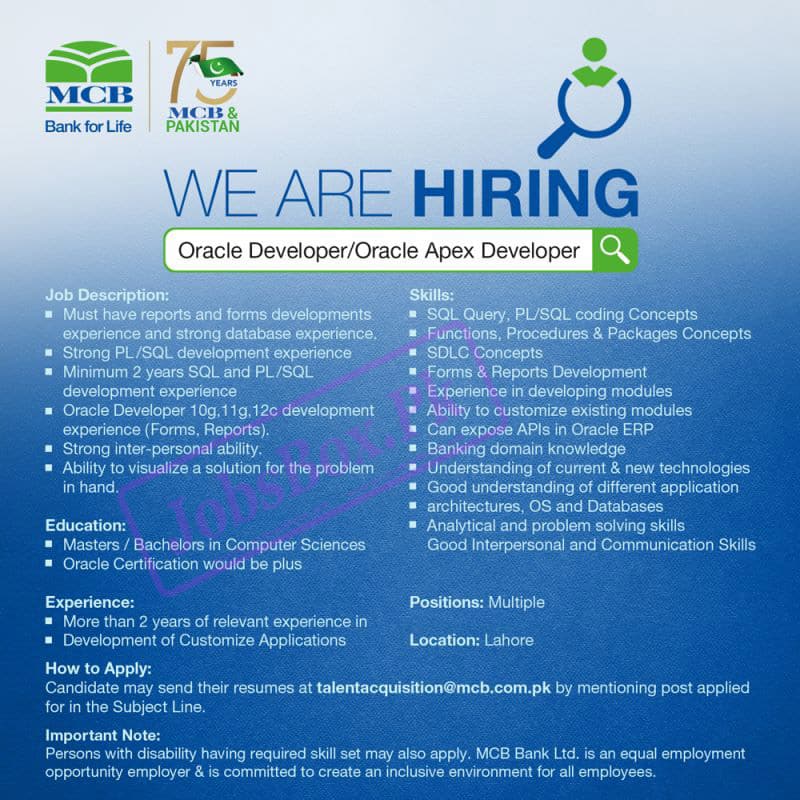 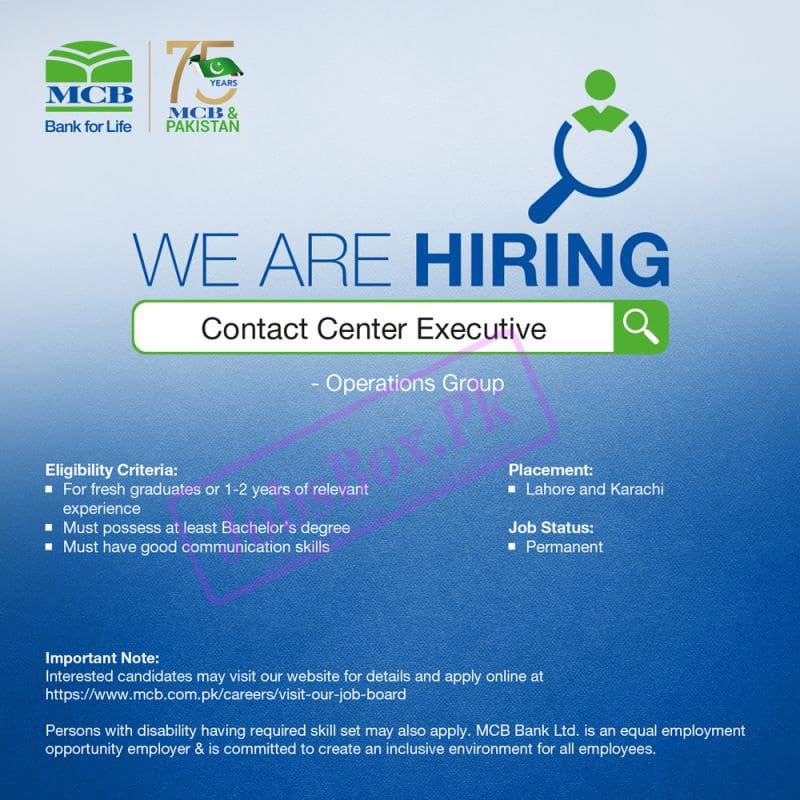